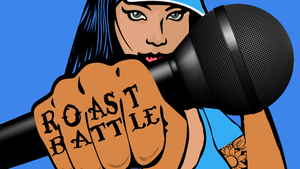 Roast Battle began at The Comedy Store in Los Angeles by co-creators Brian Moses and Rell Battle and has expanded to comedy festivals and new venues around the country. It's a no holds barred display of verbal violence. Comedians go at each other one at a time, for three rounds with guest judges deciding who is the victor. It's been packing The Belly Room in LA on a weekly basis since 2013 and for the last few months at New York Comedy Club. After a successful debut in November at The Boston Comedy Festival and a jammed show in January, Roast Battle Returns once again to Davis Square for a truly unique one night only spectacle.