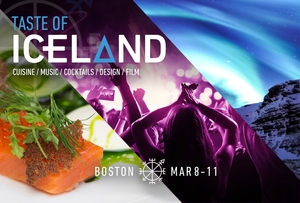 The free annual Reykjavik Calling concert, sponsored by WERS, returns to Boston on Friday, March 9 - this time at Paradise Rock Club! One of Boston’s most anticipated international concerts of the year, 2018’s lineup features Icelandic artists JFDR, whose first, full-length album was co-produced by Laurie Anderson, Yoko Ono and Tom Waits; and Sturla Atlas, one of Iceland's most exciting new acts who will be playing his first U.S. show at Taste of Iceland in Boston. The Icelandic bands will be joined by Air Traffic Controller, a Boston-based indie pop band with an an eclectic song catalog and category-defying organic/electronic sound. Admission is free and will be granted on a first-come, first-served basis. Must be 18+. RSVP on Facebook.

About Taste of Iceland
Taste of Iceland, an annual festival that celebrates Iceland’s vibrant culture, returns to Boston with a series of events March 8-11, 2018. Over the past nine years, Taste of Iceland in Boston has featured some of the best names in Icelandic food, music, art and more. The four-day festival, presented by Iceland Naturally, gives Bostonians the chance to to experience the country’s pure culture through a variety of (mostly free!) events. Click here for more information: http://bit.ly/toiBOS18