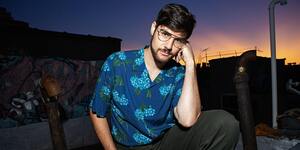 Queer Qomedy Hour is a monthly stand-up show at Hideout Comedy featuring the best local and touring LGBT+ comedians. This month we are thrilled to welcome Sam Morrison to headline at The White Bull Tavern on Thursday, April 28, 8:00 PM. Celebrate pride year-long with some laughter!

Sam Morrison is a tall gay diabetic Jew living in Brooklyn, New York who recently performed on the segment Bananamore's on the Drew Barrymore Show. He has performed in some of the most prestigious showcases in the country: The Stand Up NBC Finals, The Tonight Show Showcase, and RuPaul's DragCon. As a writer, Sam was staffed on the first season of Blind Date hosted by Nikki Glaser, currently airing on Bravo. His solo show Hello, Daddy! was critically lauded at the 2019 Edinburgh Fringe Festival. It was highlighted in GQ, The Independent, and Metro, and received 4 stars+ from The List, Deadline, Scotsgay, and Fringe Review. He is slated to return to the Festival in 2022 at Pleasance Theatre.