Queer Faces You Should Know: LGBTQ+ Voices in Performance Arts 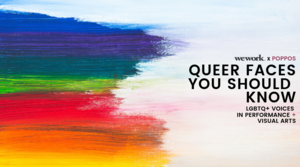 Join some of Boston's greatest LGBTQ+ creatives for a lively discussion on intersections of Queer identities and performing arts roles.

The increase of queer artists celebrating self expression is on the rise. Acceptance of gender fluidity and body positivity has become more mainstream. But, there is still a long way to go! Join us for an evening of community and conversation as we speak with some of Boston’s finest LGBTQ+ visual and performance artists around how their identity has impacted their passions.

Erin Spencer is a Boston-based comic whose dispatches from life as a single transgender woman have quickly established her as a distinctive voice in New England's comedy scene. Her wry takes on navigating everyday life as a trans woman have entertained audiences of all backgrounds and political persuasions.

Alec Suthy is a poet and queer visual artist originally from Sydney, Australia. Their themes typically explore identity, loss, and relationships. Their work has been published by the Gateway Review, Aperion Review, Fearsome Critters, Rigorous Magazine and in 2017 and 2018, they were the recipient of ‘America's Best Emerging Poet Northeast’ by Z Publishing House. They can be found on social media under the handle @dilettantishly.

Ady Del Valle is a Plus-size male model,who is changing the narrative about how the industry sees male models. His 9-5 in between modeling is an assistant at a Family Resource Center that assists people dealing with Domestic Violence, Sexual Assault, and Human Trafficking. He describes himself as a Plus/ Big and Tall Model, Body Positive, and LGBTQ+ Advocate. He has been featured in Obvious Mag, Queerty, and Narratively.

WeWork is a global network of workspaces where companies grow together. Teams of any size can find refreshingly designed collaborative space, private offices, and meeting rooms that energize their employees and their guests. But WeWork is so much more than four walls—providing community, amenities, events, and technology to evolve space into experience.

Popularly Positive was founded in 2018, with the intent to provide a bold, interactive publication for womxn focused on replacing the ideal body image with self-love and acceptance. Through partnerships with contributing writers, influencers, brands and non-profit organizations, PopPos hopes to build a network of powerful resources for those who want to be supported in their journey to self-love and expression.