Privy to the Past: Immigrant Histories from Washington Garden 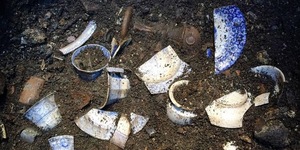 Wednesday, May 17 @ 6:00 pm
Old North Foundation Speaker Series
Privy to the Past: Immigrant Histories from Washington Garden
Speaker: Joe Bagley
Co-sponsored by the North End Historical Society
Tickets: “pay what you will” donation

Archaeologists from the City of Boston Archaeology Program were invited to Washington Garden at Old North to excavate the back yard of three brick tenement buildings that once stood in the garden. 1-3 Unity Court were built in 1830 and housed dozens of English, Irish, Jewish, and Italian immigrants between their construction and their demolition in the 1930s. The privies (outhouses) and several other structures were rediscovered in the Garden, revealing tens of thousands of artifacts from the people who once lived there. What does this material culture tell us about the lives of North Enders in the 19th century? City Archaeologist Joe Bagley will discuss the results of his excavations on the sites and reveal new insights into the dynamic and important immigrant voices and stories revealed through this archaeological dig.

Join Joe Bagley and Jim Pasto of NEHS immediately following the lecture for a reception and community conversation focused on what role immigrants have played in Boston’s history, particularly the North End. How does Old North tell the stories from the Washington Garden dig moving forward? Registration is required for the second part of the evening.

Joe Bagley joined the City Archaeology Program in 2011 as the fourth City Archaeologist since 1983. Bagley curates a growing repository of archaeological collections currently housed in West Roxbury, acts as the review and compliance agent for below-ground cultural resources in the city, educates the public in archaeology through a number of city programs, manages Rainsford Island, and manages the Archaeology Program’s social media platforms. Joe received his Bachelor's Degree in Archaeology from Boston University and a Master’s Degree in Historical Archaeology from UMass Boston. Joe has conducted archaeological surveys from the woods of Maine to the Florida Everglades. He specializes in both Native American and historical archaeological analysis and the archaeology of Boston. In 2016 he was awarded the John L. Cotter Award from the Society for Historical Archaeology for early career achievements. He lives in the Lower Mills neighborhood of Dorchester with his wife, Jen, and their dog, Jack.

The North End Historical Society (NEHS) studies and preserves the historical record of Boston’s North End. We strive promote to scholarship and to present local history in service of the wider community through publications, lectures, educational programs, and exhibits.