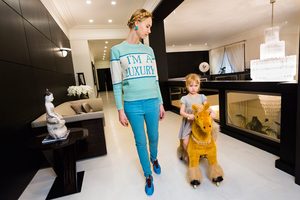 THIS EVENT IS POSTPONED. Lesley University is monitoring this situation and will make rescheduling decisions as soon as circumstances allow. Please continue to consult lesley.edu/events and lesley.edu/covid-19 for updates.

The MFA Photography and Integrated Media program welcome visiting artist and photographer Lauren Greenfield for a screening her documentary “Generation Wealth” followed by a Q&A.

Emmy-award-winning filmmaker and photographer Lauren Greenfield has produced groundbreaking work on consumerism, youth culture and gender for the past 25 years. The New York Times recently named Greenfield as "America's foremost visual chronicler of the plutocracy.” Lauren's documentary films include Thin, The Queen of Versailles and Generation Wealth. Her photographic monographs Fast Forward, Girl Culture, Thin and Generation Wealth have been screened, published and exhibited around the world.

The Queen of Versailles won Lauren the Best Documentary Director Award at the Sundance Film Festival and was named by Vogue as one of the top documentaries of all time. Her viral ad, #LikeAGirl, swept commercial awards including 14 Cannes Lions (2015) and named third Best Ad of the Decade. Earning her the #1 Director and Most Awarded Director by AdAge (the first woman to top this list), and has become part of the Museum of Modern Art's permanent collection.

Lauren's latest body of work, Generation Wealth, garnered her the 2018 Photographer of the Year from the Art Directors Club, The Paris Photography Prize 2018 (PX3), and the Lucie for Best Book Photographer of 2018.

In January 2019, Greenfield launched a production company, Girl Culture Films, to address the lack of diversity behind the camera in the advertising industry with the aim to amplify female and diverse voices.