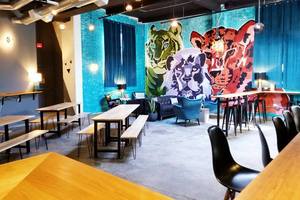 What better way to celebrate all of our male presidents than by holding a Boston Comedy Chicks performance that night at Lamplighter Brewing?!

$15- All proceeds will be donated back to the Pink Boots Society which was created to assist, inspire and encourage women beer industry professionals to advance their careers through education.

With razor sharp wit and a charm once described as “ineffable,” Tooky (rhymes with cookie) Kavanagh speaks her mind with honesty, charisma, and edge. After just a few years on the scene, Tooky has already performed in New York, Denver, CO, and all over New England.
Her standup credits include: December 2018 Comic-In-Residence at The Comedy Studio; The 2017 Women In Comedy Festival; The 2017 Boston Comedy Festival; Boston Comedy Chicks; The 2017 Boston Comedy Arts Festival; The Producer’s Club in Manhattan, NY; Comic Sit-In at The Riot Theater.

Performing regularly around New England, Kindra’s quick wit and keen observations have been making audiences laugh since 2015. Kindra often writes about her day-to-day experiences, making her storytelling perspective relatable to audiences everywhere. She was featured in the 2017 and 2018 Women in Comedy festival and is a co-producer of the Boston Comedy Chicks, a monthly show in Jamaica Plain.

Bethany Van Delft’s “hip & grounded, laid back delivery” has earned her the honor of performing at the prestigious Just for Laughs Festival in Montreal, SF Sketchfest, as well as appearances on Comedy Central, TV Guide Channel, NickMom, and 2 Dope Queens podcast.

Her "series at the Women in Comedy Festival "38/7%" was a huge hit, and monthly show, Artisanal Comedy, has been named “one of the top indie nights to check out”. Her latest project, a hilariously cringeworthy storytelling show/podcast with Nick Chambers “Starstruck: Close Encounters of the Awkward Kind” won Best Comedy Night in Boston from Improper Bostonian.

Unashamedly in touch with her inner nerd, Bethany has been a panelist on “You’re The Expert” and “Literary Death Match”. She hosts MOTH mainstages around the country, MOTH storyslams & Grandslams, is thrilled to have a MOTH story re-posted by SULU! (aka George Takei) and honored to have a story included in The MOTH's 2nd book "All These Wonders".


Boston Comedy Chicks is produced by WICF, home of the annual Women in Comedy Festival. Our mission is to help close the gender gap in comedy and feature diverse show lineups.