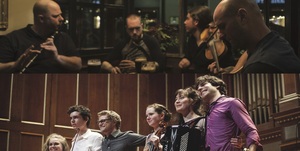 AERONAUT, in partnership with Boston public broadcaster WGBH and 99.5 WCRB, Classical Radio Boston, is thrilled to invite you to the 6th installment of the pindrop sessions!

This month – this most Irish month of March – we present two of the hottest emerging Celtic bands in the greater Boston area, with a special assist from our dear friend Brian O'Donovan of WGBH. You won't find any green beer or leprechauns running around, but you will find some of Boston's finest and most adventurous practitioners of joy-inducing, soul-satisfying, foot-stomping Irish traditional music. Plus special guest Irish dancers Samantha Jones and Amanda Carey! RSVP on Facebook here!

NIGHTSIDE
“We’re not doing this because we have to, were doing it because we need to. It’s in our veins, and we’d suffocate without it.” -- NightSide fiddle player Sean Connor

Recently profiled in WBUR Artery, NightSide does more than perform traditional Irish music – they live it. From simply passing the time of an evening to playing for dances and late night parties, their heroes and mentors connect us to a time when live music was an everyday after-hours activity. NightSide carries this tradition forward with inspired performances and inventive arrangements of Irish dance tunes old and new. They bring the music of the past into the present, putting their mark on it along the way. NightSide – it’s an attitude – a way of life; it’s Irish music.

NIGHT TREE
“One of the most exciting roots-based music groups to emerge from the New England Conservatory in many years. Their individual chops and adventurous approach make Night Tree a band to watch for.” –– Brian O'Donovan, WGBH's A Celtic Sojourn

In September of 2016, six wildly diverse musicians came together unexpectedly within the walls of Boston’s New England Conservatory to form New Acoustic band, Night Tree. The group, all students at NEC, were named the Conservatory’s WildCard Honors Ensemble for 2016-2017. Awards for this title included a sponsorship from NEC, a headlining performance at the historic Jordan Hall, and a year of working with Winifred Horan, fiddler and co-founder of Irish super-band, SOLAS. Night Tree released their debut album on September 1st of this year, produced by Séamus Egan, another founding member of SOLAS. Their album was ranked in the top 15 of every category in the compilation by Richard Gillmann from FOLKDJ-L playlists based on 12,417 airplays from 127 different DJs.

These six conservatory-trained musicians have absorbed genres from across the globe. Night Tree is unique, not only for its abnormal instrumentation of two fiddles, cello, accordion, saxophone, percussion, and the occasional viola and mandolin, but for their collective representation and incorporation of traditions from Irish, Classical, Swedish, Jazz, Klezmer, and Afro-Cuban music. Each artist’s personality is given a spot to emerge with fiery improvisation, individual compositions, and a pristine ear. The band thrives on playing in darkness as to allow themselves the opportunity to solely listen with the absence of any possible visual distractions. They react to each other at any given time, in a matter of seconds. They have learned to get inside each other’s musical minds, creating one blossoming and unpredictable wave of sound that is Night Tree.

“I’m thrilled to have been part of this brilliant young band’s debut album. They play with such spark and musicality. Thoughtful compositions, precise, inventive arrangements. An absolute joy. Go hear them!” -Séamus Egan, founding member of SOLAS and Night Tree producer

Though each member of Night Tree originates from a different musical world, the six members have come together to a create a new sound that is unique to their instrumentation and musical voice, both attracting and bewildering enthusiastic crowds while connecting folk music lovers, café radio junkies, jazz enthusiasts, free-improvisers, and beyond.

a new, ticketed performance series (early bird entry is only ten bucks which supports the artists!) taking place the first Sunday night of every month at the AERONAUT taproom in Somerville, shining light on the ridiculous pleasure of listening, featuring a soft focus on classical music. No stodginess. No competing sound. Shared silence. And sweet musical goodness in our steel-tanked fermentation garden. Plus a sweet after-party hang with the musicians!

Our last five events sold out quickly! So far we've featured Beethoven played by a full symphony orchestra, music with viols and fiddles, Stravinsky with orchestra, actors and dance, a NYC-style cabaret event, and a ragtime recital by world-famous pianist Joshua Rifkin.