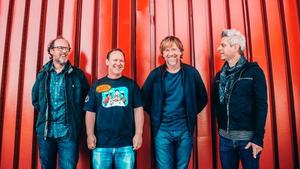 Live Nation and the Boston Red Sox are excited to announce the return of Phish to Fenway Park. As part of the Plainridge Park Casino Fenway Concert Series, they will take the stage for a pair of shows - Friday and Saturday, July 5 & 6.

During the early '90s, Phish emerged as heirs to the Grateful Dead's throne. Although their music was somewhat similar to the Dead's sound -- an eclectic, free-form rock & roll encompassing elements of folk, jazz, country, bluegrass, and pop -- the group adhered more to jazz-derived improvisation than folk tradition. Moreover, they sported a looser, goofier attitude; after all, their drummer regularly played a vacuum during their concerts. However, Phish's main claim as the inheritors to the Dead's legacy was their approach to their musical career. The band didn't concentrate on albums, dedicating themselves instead to live improvisation. Within a few years of their 1988 debut, Phish had become an institution in certain sections of America, particularly college campuses and other liberal locales. While their in-concert popularity didn't necessarily translate to huge record sales (their biggest-selling albums usually halted at gold status, with the notable exceptions of Junta and A Live One), Phish's members were still the de facto leaders of the neo-hippie jam band movement.