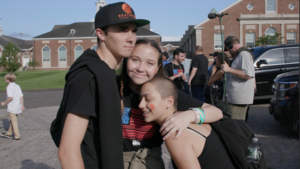 Parkland Rising follows the high school students and families who became fierce leaders of a national movement for gun reform following the shooting of 17 people at Marjory Stoneman Douglas High. This documentary goes behind the news headlines to share the personal and intimate stories of the students leading the movement, as well as the families of victims who are working together to create meaningful change.

Parkland Rising features David Hogg, Jaclyn Corin, Emma Gonzalez, grieving fathers Fred Guttenberg and Manuel Oliver, and other emerging youth activists in the immediate aftermath of the tragedy. The film documents their unfolding journey for nine defining months as they channel their anger into action and engage in an epic battle of wills with the gun lobby.

Due to the sensitive content of the film, parental discretion is advised.