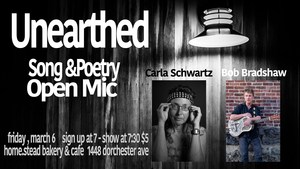 Unearthed Song & Poetry is an open mic series at home.stead bakery & cafe that happens every 3rd Wednesday of the month. Each month we feature a rising musician and poet and encourage any and all poets and musicians to sign up to share 2 pieces of their work. Doors open at 7pm and the show starts at 7:30pm. $5 cover at the door.

Carla Schwartz is a poet, filmmaker, photographer, and blogger. Her poems have been published widely in journals and anthologies. She holds a Ph.D. in electrical engineering from Princeton University, and spends her summers, (and much of spring and fall) on Lake Winnipesaukee, motoring around in a solar-powered houseboat named Wake with the Sun.

Her books include Intimacy with the Wind, (Finishing Line Press, 2017) and Mother, One More Thing (Turning Point, 2014). Her poem, “Anthem,” won the May 2019 Lunch Ticket Twitter contest. Her poem, “Wormageddon,” appears as a model poem in The Practicing Poet: Writing Beyond the Basics, edited by Diane Lockward. Her poem “Gum Surgery” was anthologized in City of Notions, A Boston Poetry Anthology.
Follow Carla Schwartz

Irish-born, Boston-based Bob Bradshaw has been exploring many facets of Americana music in the thirty years he’s lived in the States – from the Texas singer-songwriters he strives to emulate to the high-energy roots-rock he plays in bar bands any night of the week. He has lived in New York City and in San Francisco, where his rock band ‘Resident Aliens’ was a fixture on the local scene during the 90’s. He graduated from the Berklee College of Music in 2009, having mostly played in bluegrass ensembles there. ‘Queen Of The West’ is his eighth album of original songs. Mining parallels between the west of Bradshaw’s native Ireland, and the frontiers of the American west, the songs are told through the same characters.
Follow Bob Bradshaw Music.