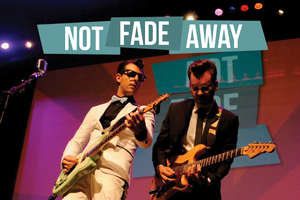 Not only will you be twirling down memory lane to the unforgettable sounds of Buddy, Ritchie Valens and The Big Bopper…you’ll be taken to a world of legends with hits by Bill Haley, The Beach Boys, Roy Orbison, Jerry Lee Lewis, Elvis, The Beatles and more!

And these aren't your average hokey imitations. You’ve never heard or seen the legends of rock n roll quite like this!

Our band members (straight outta NYC) have performed in off-broadway shows, they've dazzled audiences nationally in productions of Buddy: The Buddy Holly Story, Ring of Fire, Million Dollar Quartet, and others, and have now come together to create a rock n roll legends show unlike any other!

With our guys (and gals) jumping up on instruments, dancing, soloing behind their heads, jumping through ropes (yee-haw!) all to these powerful NEW renditions of the classic hit songs of the 50's, 60's and beyond, this national act has entertained thousands of all ages across the country!

This performance will feature Austin Price who recently performed on the GBSC stage as Johnny Cash in Million Dollar Quartet.

This is NOT just your typical Buddy Holly tribute!