Nichols after Dark: A Night at the Opera 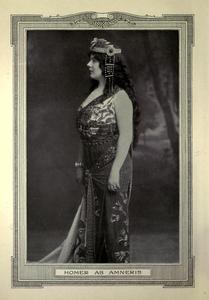 The Nichols House Museum invites you to participate in a unique musical event, the latest installment in the Nichols after Dark programming series. This rare opportunity offers attendees the chance to not only experience the Museum's beautiful turn-of-the-century parlor at night but also to enjoy an operatic performance set to the dramatic backdrop of Flemish tapestries and Japanese urns. The evening's performance will celebrate Metropolitan Opera singer Louise Homer (1871-1947), who in 1902 performed in the very same room.
Louise Homer was married to the second-cousin to Rose Standish Nichols (1872-1960) and was one of the most gifted and popular opera singers of the early twentieth century. A contralto, Homer achieved international acclaim as a member of the Metropolitan Opera (1900-1919) and her most notable role was Amneris in Giuseppe Verdi's Aida. In March of 1902, the Nichols family hosted a musicale starring Homer in their 55 Mount Vernon Street home, now the Nichols House Museum. Many "proper Bostonians" attended the performance, including Isabella Stewart Gardner, and while the evening's program is unknown, the family thought it a huge success.
We hope you'll join us for this special evening with operatic singer Jacqueline Novikov, who will perform five arias from Homer’s repertoire. Champagne reception to follow the performance.
Tentative Program:
Addio, o miei sospiri from Orfeo ed Euridice (Christoph W. Gluck)
Che faro, senza Euridice from Orfeo ed Euridice (Christoph W. Gluck)
Geliebter Komm from Tannhauser (Richard Wagner)
Faites-Lui Mes Aveux from Faust (Charles Gounod)