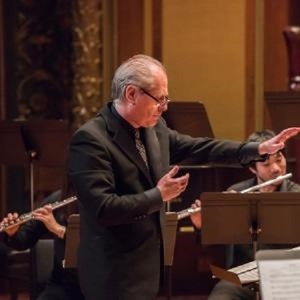 The NEC Wind Ensemble concludes its 2020–21 season with 50th anniversary presents—a masterwork of the past and one destined to be so in the future. In 1930, the Boston Symphony celebrated its 50th anniversary by commissioning Igor Stravinsky’s Symphony of Psalms, a moving and powerful tour de force of choral and instrumental writing. It was the high point of Stravinsky’s neoclassical period and of which he said: “it is not a symphony in which I have included Psalms to be sung. On the contrary, it is the singing of the Psalms that I am symphonizing.” In 2020 the NECWE celebrated its 50th anniversary and COVID postponed the premiere of its celebratory piece. Commissioned to honor the occasion was Jazz master Chris Brubeck (son of jazz legend David) who has written for major orchestras and ensembles internationally and was delighted to write his first wind ensemble piece. Entitled Fifty, it is “very NEC”—a vibrant wedding of jazz and classical styles—a fitting present for an NEC 50th. NEC's Symphonic Winds brings several gifts of its own to the evening: a new work by Da-Yu Liu '24 DMA, arrangements of Henry Mancini and Leonard Bernstein. and a cello concerto featuring Kenny Lee '18 DMA.

This performance is open to in-person audiences, and is also viewable via livestream.