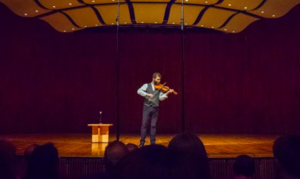 Grammy award-winning violinist and producer Johnny Gandelsman’s musical voice reflects the artistic collaborations he has been a part of since moving to the United States in 1995. Richard Brody of The New Yorker has called Johnny Gandelsman “revelatory” in concert, placing him in the company of “radically transformative” performers like Maurizio Pollini, Peter Serkin, and Christian Zacharias.

Gandelsman integrates a wide range of creative sensibilities into a unique style amongst today’s violinists, one that, according to the Boston Globe, possesses “a balletic lightness of touch and a sense of whimsy and imagination.” Gandelsman’s recording of the complete Bach Sonatas and Partitas for Solo Violin, which reached #1 on the Billboard Classical Chart, and made it onto NY Magazine and NY Times Best of the Year lists, was described by the Globe as “…sparklingly personal Bach, shorn of grandeur, lofted by a spirit of dance, and as predictable as the flight of a swallow.”

Gandelsman has been producing records since starting his label, In a Circle Records, in 2008. Recent credits include three Brooklyn Rider albums: “Philip Glass – Annunciation” (OMM, 2019); “Dreamers”, a collaborative album with vocalist Magos Herrera (Sony, 2018); and “Spontaneous Symbols” (In a Circle, 2017). Additional producing credits include his own recording of the complete Sonatas and Partitas for violin by JS Bach (In a Circle, 2018) and two albums with Silkroad Ensemble and Yo-Yo Ma: Music for “The Vietnam War”, a film by Ken Burns and Lynn Novick (In a Circle, 2017); and “Sing Me Home,” a Grammy-award winner for Best World Music album (Sony, 2016).

This performance is part of the 2019–20 MIT Sounding series, an annual concert series curated by Evan Ziporyn, faculty director of CAST and professor of Music and Theater Arts, and presented by the MIT Center for Art, Science & Technology (CAST).

Contemporary music with a global cast