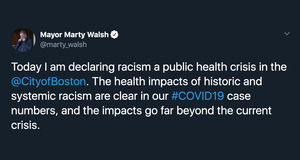 Mayor Walsh has declared racism a public health crisis in the City of Boston as of June 12, 2020. Read the executive order here:

Mayor Walsh has acted to:

Declare racism a public health crisis and commit to eight strategies that are focused on addressing the impact that racism has on the lives of residents and their overall health. The Boston Public Health Commission will release a plan within 120 days with specific actions and a yearly report measuring progress starting in 2021.

Reallocate 20% of the Boston Police overtime budget to make investments in equity and inclusion, including:

> $1 million to support trauma teams and counseling services at BPHC

> $2 million for community based programs and support, such as violence intervention grants, youth programming, language and food access, immigrant advancement, the Age Strong Commision and the Human Rights Commission

> $2 million for initiatives to support minority and women-owned businesses