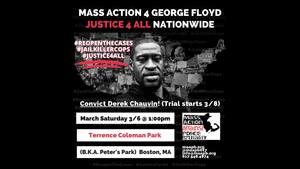 Families impacted by police violence across the country are calling for a nationwide protest on March 6 the weekend before the trial begins of the cop who killed George Floyd. In Boston, Mass Action Against Police Brutality has joined this call in conjunction with several Boston families and throughout the state of Massachusetts to demand.
Convict the cops who murdered George Floyd!

Prosecute, convict, and jail cops who abuse, murder and cover-up!

Prosecute, convict, and jail those in government who aid and abet police brutality!

Reopen of all past cases of police brutality, abuse, murder and cover-up!