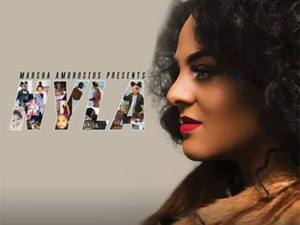 Love enlarges life and makes each experience three-dimensional. It also dramatically amplifies the impact of art.

GRAMMY® Award-nominated soul singer, songwriter, and pianist Marsha Ambrosius catalogs two transformative years via the 16 impassioned, irresistible, and inimitable anthems comprising her third full-length album and first for Entertainment One (eOne)—NYLA. During that time, she met her future husband on the road, married him, and gave birth to the album’s namesake, her daughter Nyla.

Now, these moments live and breathe in her biggest and boldest body of work to date. “Bringing a daughter into the world just added to the size of my heart, which added to the size of my musical experience,” she admits. “Playing a piano isn’t just playing a piano anymore. Writing lyrics isn’t just writing lyrics anymore. I’m channeling something that was completely foreign to me before. It’s real love. I let go of everything, fell in love, and became a wife and mother. The record gives you this storyline.”

Nearly two decades in the game set the stage for this story. After co-founding the gold-certified and influential Floetry, Marsha went from penning tunes for Michael Jackson “Butterflies,” Alicia Keys and Jamie Foxx to launching a successful solo career. Her 2011 debut, Late Nights & Early Mornings, bowed at #1 on the Billboard Top R&B/Hip-Hop Albums Chart and #2 on the Top 200 and yielded hits such as the GRAMMY® nominated “Far Away” and “Hope She Cheats On You (With A Basketball Player).” As her profile rose, The First Family - The Obama’s, invited her to perform at The White House for The National Christmas Tree Lighting.


2014 saw the follow-up Friends & Lovers soar to #2 on R&B/Hip-Hop Albums Chart and #12 on the Top 200 highlighted by collaborations with Dr. Dre, Charlie Wilson and her nephew Skye. In between a relentless tour schedule, she lent her voice to five tracks from Dre’s 2015 chart- dominating and gold-selling swan song, Compton, in addition to high-profile collaborations with the likes of Kanye West, Solange, A Tribe Called Quest, and many more. In the midst of these accomplishments, NYLA initially took shape during a period of emotional upheaval.

“I was losing my mind,” she admits. “Being a creative can be a lonely and cold road. I just didn’t feel like myself. Channeling all of the energy into the music is what helped save my sanity. Poems turned into melodies and a bunch of songs like my personal therapy in a sense. From beginning to end, it’s me letting go of everything I wanted to let go of in my life and experiencing things all over again through Nyla’s eyes.”

She initially teased the impending album with “Luh Ya.” Satiating rabid fan demand, it quickly generated 7 million Spotify streams. Kicking off the campaign, the first single “Old Times” pairs sparse piano keys and subtle bass with a stark vocal that builds towards a rapturous refrain punctuated by fiery falsetto.

“My heart was desperate to have love, but I was also afraid of it,” she confesses. “I wrote ‘Old Times’ before I got married. A year later, it sounded so different. To me, it’s about wanting to preserve that old love and that good feeling when you used to listen to your Stevie Wonder, Prince, Marvin Gaye, and Michael Jackson records. You want to be comfortable, hold your loved ones tight, cry, sing, and pray. It’s all about true feelings for me.”

Pushing the limits of her expansive range, the emotionally charged “Never Be The Same Again” pays tribute to a friend who would be tragically taken from the world too soon. She notably recorded it in one tearful take, and it remains a stand out.

“He was in the wrong place at the wrong time, and he was stabbed to death,” she sighs. “It’s still difficult to talk about and say he’s not here anymore. We wish we could go back, but we never can. It’s dedicated to his memory. I’m crying out my feelings on this one.” Elsewhere, Nyla swings from the swaggering strut of “I Got It Bad” to “How High,” which
perfectly captures what she describes as a “Marsha Moment.”

“I’ve been writing and recording with just me and the keys since I was eight,” she smiles. “Even with all of the bells and whistles. It comes down to great lyrics, a melody, and a strong performance. It’s vulnerable when it’s just me and the piano. There are a lot of those moments.”

They’re also impossible not to feel. That’s what makes NYLA so impactful. “I’m trying to bring feeling back,” Marsha leaves off. “It’s nothing contrived. I’m trying to create music that people can feel again. I felt this. I’m sharing it now.”