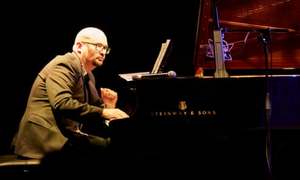 “Better than anyone at melding the sensibilities of post-60’s jazz and indie rock.” – The New York Times

Best known for his work in the contemporary jazz trio The Bad Plus, game-changing jazz pianist, composer, and writer Ethan Iverson has performed in venues as diverse as the Village Vanguard, Carnegie Hall, and Bonnaroo. He has collaborated with Joshua Redman, Bill Frisell, and the Mark Morris Dance Group; and created a faithful arrangement of Igor Stravinsky’s The Rite of Spring as well as a radical reinvention of Ornette Coleman’s Science Fiction. In 2017 Iverson premiered the score “Pepperland” for the Mark Morris Dance Group, and with Aaron Greenwald co-curated a major centennial celebration of Thelonious Monk at Duke University. In 2018 Iverson premiered Concerto to Scale with the American Composers Orchestra and released “Temporary Kings,” a duo album with Mark Turner on ECM. He also has been in the critically-acclaimed Billy Hart quartet for well over a decade, and has appeared with jazz luminaries such as Ron Carter, Mark Turner, Tom Harrell, Chris Potter, and countless others.