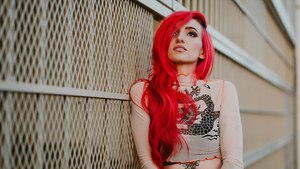 Lights has partnered with PLUS1 so that $1 from every ticket will go to support Grid Alternatives and their work bringing accessible renewable energy technology and job training to underserved communities. www.gridalternatives.org

Always pushing boundaries, alt-pop phenomenon Lights has never shied away from a challenge. Through her first three records, Lights built an incredibly passionate fanbase, selling out tours around the world, earning 100M in U.S. streams, 200K in U.S. album sales, and two JUNO Awards, not to mention the 2M + rabid fans who follow her every move online. Yet through this success, she felt like she had more important things to say through her music but just didn’t know how to get them out. Then came En, short for Enaia, a fictional character from a fictional world created in Lights’ imagination that is not altogether different from herself. Throughout a year long process, she began secretly working on an unprecedented idea writing and drawing her own comic book based around this alter ego of sorts. And on top of that, just to make things more difficult – an album to coincide with the whole thing. Thus came Skin&Earth, the Canadian singer’s fourth record and her most open and vulnerable to date. “In the past, Lights wouldn’t write about being angry or Lights wouldn’t write a song about fighting or Lights wouldn’t write about sex,” she says. “So En is me in another dimension, and I was able to write about all the things that I never wrote about before.”