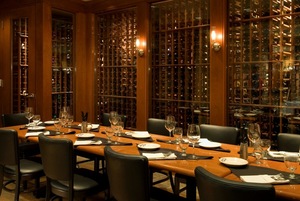 On February 13, Legal Sea Foods in Park Square will host a wine dinner paired with selections from Opus One Winery (Oakville, California). French in style but Californian in execution, the iconic winery was officially born in 1983 and is the brainchild of two powerful and dynamic wine personalities: Philippe de Rothschild of Chateau Mouton Rothschild in Bordeaux and Napa Valley vintner Robert Mondavi. Sharing one vision which was to create wine of uncompromising quality, the two set off on a journey which would redefine and alter the course of fine wine production in the Napa Valley region.

Today, Opus One is made up of four parcels comprising approximately 170 acres and produces one ultra-premium California red wine blend each year. While the grape composition of each vintage is different, Opus One is most often a blend of five grape varietals – Cabernet Sauvignon, Cabernet Franc, Merlot, Malbec and Petit Verdot.

Legal Sea Foods will team up with Opus One Winery’s sales manager Ms. France Posener, a 30-year veteran of the winery, to host an exclusive four-plus-course dinner featuring signature cuisine paired with her selections from the Opus One Winery. The menu will be presented as follows in Park Square’s 10,000 bottle wine cellar: