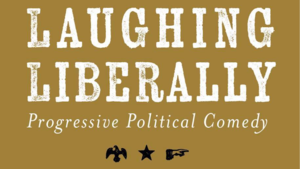 ** Be aware, our shows have SOLD OUT in the past! Presale tickets available at https://www.eventbrite.com/e/laughing-liberally-boston-tickets-41905226661

We're back to bring you Laughing Liberally Boston, a political comedy show featuring some of Boston’s top liberal and progressive comedians.

Comedians on the February 10th bill include:

In addition to some of the finest progressive comedians Boston has to offer, each Laughing Liberally Boston show will feature a special interview segment with a local political figure, journalist or activist. This month’s guest is Segun Idowu, of the Boston Police Camera Action Team.

In August 2014, Segun organized the Boston Police Camera Action Team (BPCAT) with fellow high school graduate, Shekia Scott. The mission of the community group was to further accountability and safety in Boston through the mandatory use of police body-worn cameras. In early 2015, BPCAT released a report proposing policies for the use of body-worn cameras. As a result of their efforts, Boston began a yearlong mandatory body-worn camera pilot program and policy in September 2016.

Laughing Liberally Boston takes place the second Saturday of every month, with the next show on Saturday February 10h at 8pm at Cafe At the Armory, 191 Highland Ave, Somerville, MA 02143. Admission is $8 online and $10 at the door.