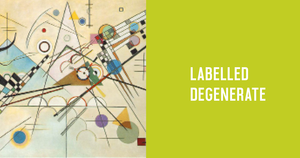 In the late 1930’s, the Nazi regime identified hundreds of visual artists and musicians as “degenerate.” Preeminent figures of 20th century art, including Chagall, Kandinsky, Klee, Schoenberg, Hindemith and Weill, all had works banned or burned. Hear this once-forbidden music, now venerated, in a concert including visual projections, and writings from the artists, as their identity and livelihood was stripped away.