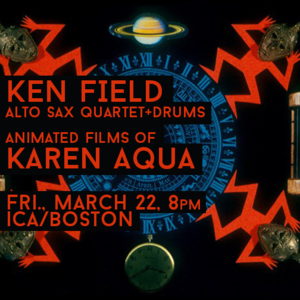 Saxophonist-composer Ken Field (Birdsongs of the Mesozoic, Revolutionary Snake Ensemble) teamed with his wife, award-winning independent animator Karen Aqua, to create soundtracks for her animated films for several decades until her untimely passing in 2011. In 2017 Field was invited by the Animator Festival (Poland) to perform live for a program of Aqua's films and assembled an unusual instrumentation of four alto saxophones and a drummer. The resultant performance was celebrated as the highlight of the festival. Field brings this unique program of live music and animated film to the ICA for a single special performance. The lineup features Ken Field, Stan Strickland, Lihi Haruvi, and Neil Leonard on alto saxophones; and Savannah Marshall on drums.