Katya with the Harvey Diamond Quartet 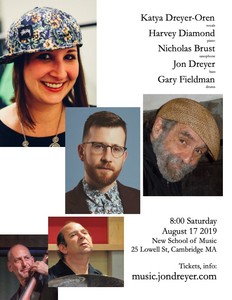 New York vocalist Katya Dreyer-Oren grew up surrounded by music. She co-founded CQU, an award-winning a cappella vocal jazz quartet, at age 14. Upon graduation, Katya was awarded the DiDomenico Scholarship for Majors in Music. While pursuing undergraduate studies at Brandeis University, Katya became the first music student there to concentrate in jazz. She served as the music director for several of the school's student-run musicals, sang trumpet parts in the big band, played piano with the orchestra, and wrote a jazz re-orchestration of Sondheim's “Company” for a student theatre group. During her junior year study abroad program, Katya was hired as a soloist with the chorus Universidad de Sevilla. After graduating from Brandeis, Katya joined Boston Jazz Voices, an 18-person jazz a cappella group directed by Tsunenori “Lee” Abe, who would become her mentor and friend. Although she was the youngest member of the group, within two years of joining she became the Assistant Director. She was also the co-music director of Fermata Town A Cappella, an award-winning vocal group. She received her master's degree in vocal jazz performance at New England Conservatory, where she studied with Dominique Eade, John McNeil, and Jason Moran. After grad school, she moved to New York, and started More Than Four, a multi-city four-person jazz vocal group with Lee Abe. The group went on to perform at Berklee Performance Center, the Clark Terry UNH Jazz Festival, and WBUR’s yearly reading of A Christmas Carol. Katya became the music director for BLACKOUT, an award-winning post-collegiate a cappella group, where she led the group to perform in locales such as the Today Show and the opening of Hudson Yards. She currently sings with Inspire: a Choir for Unity, a choir that partners with nonprofits to raise awareness, and performs regularly with the Nicholas Brust Quintet.

The legendary jazz pianist Harvey Diamond has graced the Boston area for decades with his music which is at once both deeply intricate and deeply emotional to even the most casual listener. Over the years he has performed across the U.S. and in Europe. A student of Lennie Tristano through Tristano's last decade, Harvey has done concert appearances with NEA Jazz Masters Sheila Jordan, Dave Liebman, and Art Farmer, and also with Charles Neville, Herb Pomeroy, Harvie S, John Abercrombie, George Mraz, Jay Clayton, Joe Hunt, Don Alias, Billy Drummond, Jason Palmer, Cameron Brown, Marc Johnson, Marcus McLaurine, and many others. After decades of patience by his fans, he has finally released some recordings, including It Could Happen To You with Domenic Landolf, Arne Huber and Jorge Rossy (2019); Look Up For Down with Hannah Rose Diamond, Jamie MacDonald, and Claire Arenius (2019); Fair Weather with Cameron Brown (2018); and The Harvey Diamond Trio with Marcus McLaurine and Satoshi Takeishi (2015). Cameron Brown says of Harvey, "Harvey Diamond is a unique and brilliant musician: a pianist's pianist with a remarkable touch, unimpeachable technique and enormous dynamic range. A creative and unpredictable improvisor, Harvey's roots go back to Lennie Tristano and Bill Evans, spiced with just a touch of Cecil Taylor. He draws the audience into his world and holds it spellbound."

Heralded as a premiere saxophonist of his generation, Nicholas Brust has established his voice in the world of modern jazz. Will Vinson says, "Nick Brust’s playing and writing is evidence that the future of the alto saxophone is in good hands. Rarely do you find a young player who combines exquisite, head-spinningly dextrous playing with such thoughtful ideas and compositions. Check him out!" David Kastin, author of Nica's Dream: The Life and Legend of the Jazz Baroness says, "It’s clear that while Brust has absorbed the varied influences of a couple of generations of jazz saxophonists, he is well on the way to developing a clear personal voice." Nick released an EP of original music entitled 'Brooklyn Folk Songs' in January 2015. Brooklyn Folk Songs “showcases a set of original compositions that infuse sturdy melodies with a rich, contemporary harmonic palette...like the borough for which it’s named - encompasses a variety of moods along with its own unique accent” (David Kastin). Since then Nick has continued to showcase his compositional and improvisational talents in a series of videos that can be found on his Youtube channel. Nick recently recorded his debut full-length album and plans to release it in Fall 2019. Before moving to New York, Nick attended New England Conservatory in Boston where he studied with Jerry Bergonzi, Frank Carlberg, Ran Blake, John McNeil, Donny McCaslin, and Miguel Zenón. He graduated with honors in May 2012 with a Master's degree in Jazz Performance. Prior to attending NEC, Nick attended the Eastman School of Music, where he studied with Walt Weiskopf, Harold Danko, and Chien-Kwan Lin. Nick graduated in May 2010 with a Bachelor's degree in Jazz Studies and Music Education. Nick has continued his studies in New York with Will Vinson, Lage Lund, and Seamus Blake.

Percussionist, composer and music educator Gary Fieldman is active in the Boston, Massachusetts area and is creative in a wide and eclectic variety of musical situations including symphony orchestras, jazz ensembles and New Music groups. His recordings and compositions include Field Effect, The Gary Fieldman Quartet, on The Rotary Records, and Ratty's Loving Surprise, a narration with music composition featuring new music ensemble Know Trio. Fieldman is also the founder of museaid.org, an artist supported funding organization concentrating on the victims of war in Darfur. He has performed with Bill Frisell, Bevan Manson, Charles MacPherson Quartet, Judy Collins, and many others.

Listen to what Warne Marsh called "the spontaneous creation of beauty."