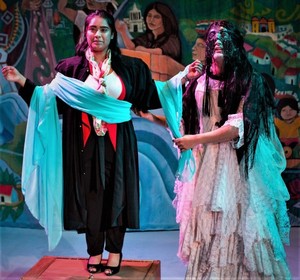 Join us for this play about the real life of "MeToo Dreamer" Judge Xiomara Torres.

Xiomara Torres doesn’t recall much about the night in 1980 when she was 9 and crossed a river between Mexico and the United States. Though they had walked for hours through the wilderness that night, no one spoke much — not her mother, her three young siblings, or the paid “coyote” who led them to their new lives in America. Torres has held onto that image of hope and possibility to rise from undocumented immigrant to one of Oregon’s newest judges. She brings diversity to the bench not often seen in Oregon or across the nation — as a Latina but also as a child abuse victim and product of the foster care system.

Woven with magical realism and Mayan folktales from her home country of El Salvador and through their journey across Mexico, Salvadorian playwright Milta Ortiz will create this new work inspired by her own immigrant experiences. Teatro Milagro’s production of "Judge Torres" follows Xiomara’s journey from Salvador to Oregon, and her struggles through foster care and onto college. La Siguanaba, a mythical being from El Salvador, will guide her on her, providing strength and wisdom to light the way, and Jan, her court appointed advocate, will pull her up when the challenges become too overwhelming. As a “MeToo Dreamer” the odds of success were small, making Xiomara’s story of becoming a judge a great inspiration.

Co-sponsored by The Women’s Center and The Oxford Street Players.