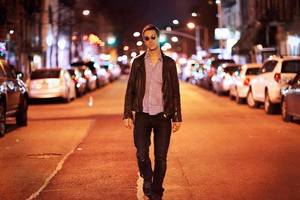 For every song Joseph Arthur has released in a critically acclaimed, Grammy-nominated career that has spanned nine full-length albums and 11 EPs, he’s probably kept three others in the vault for safekeeping. Indeed, Arthur has been known to start working on a new album — or two — while simultaneously trying to finish another.

It was amid this abundance of riches that the Brooklyn-by way of Ohio-native began molding a collection of music under a single narrative thread: The Ballad of Boogie Christ, described by Arthur as “a fictionalized character loosely based on my own journey.”

At first, it was a song here or there, or a set of lyrics with no accompanying music. Then, those songs would get recorded and set aside. They’d get re-recorded and revised. They’d start to make sense in relation to their brothers and sisters, and then they wouldn’t. And pretty soon, more than half-a-decade had flown by and Boogie Christ was no closer to coherency.

“For some reason, I’ve been avoiding finishing this record for a long time,” Arthur says with a laugh. “It’s been an albatross around my neck. I don’t know why, but it has.”

Yet despite its labored birth, The Ballad of Boogie Christ has defied the odds to become another essential cornerstone of Arthur’s robust discography. Encompassing sessions put to tape in upstate New York, Los Angeles, Minneapolis and Arthur’s own Brooklyn studio, the 11-song album showcases the artist’s signature rich storytelling set to a diverse range of rock’n’roll.

“I don’t know that there’s a beginning, middle and end to the story, but there are definitely experiences, situations and perspectives that point in those directions,” says Arthur. “I wanted to let the listener fill in some of the blanks without telling the whole story in a straight-ahead way.”

The album begins with the surprising orchestral pop of “Currency of Love”, on which Arthur unveils a passionate croon unlike any vocal performance he’s ever given. From there, Boogie Christ offers epic affirmations on overcoming addiction (the seven-minute closer “All the Old Heroes”), anthems of open-hearted solidarity (“Wait for Your Lights”, “It’s OK To Be Young/Gone”) and the kinds of slow-burning narratives (“Famous Friends Along the Coast”, “I Used To Know How to Walk on Water” and a reimagined, hymn-like version of his standout, “I Miss the Zoo”) that have won Arthur a legion of fans around the globe.

Songs like “Black Flowers”, “I Used To Know How to Walk on Water” and the title cut were recorded several years ago with help from the Band’s legendary keyboardist Garth Hudson and bassist Catherine Popper (Ryan Adams, Jack White), while newer additions to the track list such as “Currency of Love” and “Saint of Impossible Causes” were crafted in Los Angeles with assistance from Chris Seefried (Fitz & the Tantrums, Lana Del Rey). Among the other guests on Boogie Christ are Ben Harper (Arthur’s bandmate in Fistful of Mercy), session drummer extraordinaire Jim Keltner, Joan As Policewoman leader Joan Wasser and composer Paul Cantelon (Oliver Stone’s W., Julian Schnabel’s The Diving Bell & the Butterfly).

“There are certain moments on the album that are just pop music and sugary,” Arthur says. “I didn’t want it to be this diatribe of heaviness, and it had been like that sometimes. I definitely wanted moments of relief within it, where you just get a good jam.”

At the center of the project is the autobiographical “King of Cleveland,” a classic story song that connects Boogie Christ the character with Arthur the flesh-and-blood artist. On it, the narrator apprentices alongside a big fish in a small pond, “playing blues in the back seats, from biker bars to limousines” — much like Arthur did in his early professional career in Northeast Ohio. Says Arthur, “He’s just starting to live the life he’s imagined, playing roots boogie in the real America — Ohio.”

“I’ve heard David Bowie talk about how Ziggy Stardust and some other records were the beginnings of screenplays that he just never finished,” he says. “I could really see this becoming something deeper and bigger than just an album.

“Chuck Prophet reminded me that there’s always the Great American Novel,” he continues. “And that really stuck in my head about Boogie Christ. That’s what I’ve been wanting to achieve with this album. He encouraged me that it was okay to dream big.”