Jonathan Safran Foer & Frances Moore Lappé, We are The Weather 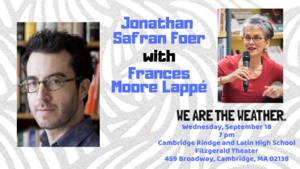 Please note that this event is ticketed, and tickets include a copy of the book! The event will take place off-site at Cambridge Rindge and Latin High School's Fitzgerald Theater, and you can pick up your copy of the book at the event.

Some people reject the fact, overwhelmingly supported by scientists, that our planet is warming because of human activity. But do those of us who accept the reality of human-caused climate change truly believe it? If we did, surely we would be roused to act on what we know. Will future generations distinguish between those who didn’t believe in the science of global warming and those who said they accepted the science but failed to change their lives in response?

In We Are the Weather, Jonathan Safran Foer explores the central global dilemma of our time in a surprising, deeply personal, and urgent new way. The task of saving the planet will involve a great reckoning with ourselves—with our all-too-human reluctance to sacrifice immediate comfort for the sake of the future. We have, he reveals, turned our planet into a farm for growing animal products, and the consequences are catastrophic. Only collective action will save our home and way of life. And it all starts with what we eat—and don’t eat—for breakfast.

Jonathan Safran Foer is the author of the novels Everything Is Illuminated, Extremely Loud and Incredibly Close, and Here I Am, and of the nonfiction book Eating Animals. His work has received numerous awards and has been translated into thirty-six languages. He lives in Brooklyn, New York.

Frances Moore Lappé is the co-founder of Food First, the Institute for Food and Development Policy, and the Small Planet Institute. She is the author of nineteen books, including the three-million-copy Diet for a Small Planet and, most recently, World Hunger: 10 Myths, co-authored with Joseph Collins. Lappé has received eighteen honorary doctorates, as well as the Right Livelihood Award, often called the “Alternative Nobel,” and the James Beard Foundation’s “Humanitarian of the Year” award. Gourmet Magazine chose her among twenty-five people whose work has changed the way America eats. Lappé has been a visiting scholar at the Massachusetts Institute of Technology and the University of California, Berkeley.