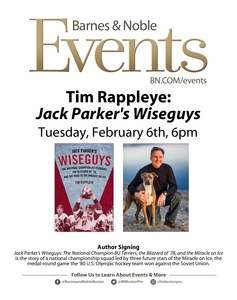 Jack Parker’s Wiseguys is the story of a high-flying, headline-dominating, national championship squad led by three future stars of the “Miracle on Ice,” the 1980 U.S. Olympic hockey team that beat the heavily favored Soviet Union. Now retired, Parker is a thoughtful statesman for the sport, a revered figure who held the longest tenure of any coach in Boston sports history.

Parker and his team were to face the pressure-cooker expectations of four previous also-ran seasons, further heightened by barroom brawls, off-the-ice shenanigans, and the citywide shutdown caused by the biggest blizzard to ever hit the Northeast.

The ’78 season was to be Parker’s watershed, a roller-coaster ride of nail-biting victories and unimaginable tragedy, played out in increasingly strident headlines as his team opened the season with an unprecedented twenty-one straight wins. It is a compelling tale for Boston sports fans and everyone else who feels a thrill of pride at America’s unlikely win over the Soviet national team—a victory forged on Commonwealth Avenue in that bitter, beautiful winter of ’78.