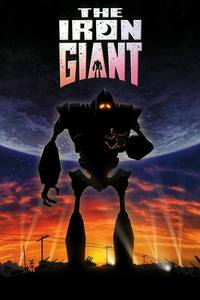 A little background on tonight's film from the critics, Devon and George:

This 1999 animated sci-fi comedy/drama is Brad Bird’s debut feature. The story takes place during the cold war in 1957 in a quiet New England town. It follows a young boy, Hogarth Hughes, after he discovers a massive robot that fell from space. With the help of a scrap metal artist, he tries to prevent FBI agent Kent Mansley from discovering the Giant and getting the military involved. The film blends CGI and traditional animation and has a stellar voice cast including the likes of Harry Connick Jr., Jennifer Aniston, and Vin Diesel as the titular Iron Giant. Although the film was critically successful, it was a box office failure, grossing $30 million worldwide against its near $70 million dollar budget. Fortunately for audiences everywhere, Brad Bird would bounce back at Pixar, with critical and box office darlings "The Incredibles" and "Ratatouille."

As with the first film in our series, The Princess Bride, this film did not achieve its cult status until the VHS release. The movie is now considered by many to be a modern animated classic, in part due to Brad Bird’s subsequent success with Pixar. This is another film that feels timeless with its vibrant autumnal hues and classic animation. Despite it being a family film, the story also features the rich texture of the animation, spinning a classic coming of age story with heaping spoonfuls of sci-fi, sharp wit, and Cold War hysteria. As a kid, I’d go to my local video store, and nine times out of ten, I’d pick up "Honey, I Shrunk the Kids" or "The Iron Giant." Now, I can go to Netflix and watch this film, looking far better than it ever did on VHS, and still feel like an excited child on his way to the video store.