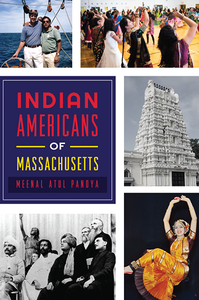 Indians are the most recent immigrants in Massachusetts. Though a tiny minority, their contributions are numerous and far-reaching. Author Meenal Atul Pandya details the influence of Indians on Massachusetts history. Swami Vivekananda arrived in Boston in 1893 and left a lasting legacy of Hindu philosophy. Sushil Tuli opened a unique community bank, Leader Bank, as the first and only minority-owned bank in the state of Massachusetts. The Deshpande Center for Technological Innovation at MIT, created with the grant of $20 million by Desh and Jaishree Deshpande, empowers MIT’s researchers to make a difference in the world by developing innovative technologies.

Meenal Pandya has been writing about India and its culture for more than two decades, observing the lifestyle and issues that face the Indian diaspora. She has written five books, including The Indian Parenting Book, Vivah and Pick a Pretty Indian Name for Your Baby. She has published dozens of articles in magazines such as India Today and World International touching on issues about the Indian community in the United States. She received an MBA from Sacred Heart University in Fairfield, Connecticut, and worked as Assistant Vice-President of Multibank International. Currently she works as a financial communications consultant. She has been living with her husband for more than thirty years in Massachusetts, where they raised two daughters.

*Note: This event will be held offsite, at the Boston Public Library's Central Branch in Copley Square. More Information can be found here.*

15/05/2019 18:00:00 15/05/2019 19:00:00 15 Indian Americans of Massachusetts Indians are the most recent immigrants in Massachusetts. Though a tiny minority, their contributions are numerous and far-reaching. Author Meenal Atul Pandya details the influence of Indians on Mas... The Boston Public Library Central Branch in Copley Square, Boston, MA 02116 Organizer Organizer e-mail false DD/MM/YYYY Reddit