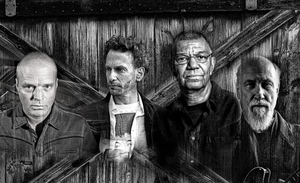 This all-star band calls themselves Hudson, named after the Hudson River Valley they each call home. Drummer Jack DeJohnette, bassist Larry Grenadier, keyboardist John Medeski, and guitarist John Scofield team up to celebrate their musical histories and Jack’s 75th birthday year in a tour de force of creative interplay. Fans know them as hard swinging jazz masters, deft and creative jam purveyors, rocking funky groove maestros, each musician at the top of his game. It’s rare that so impressive a group of individuals finds time away from their own projects to tour together. True to the spirit of the project’s name, they have collected a repertoire of Hudson Valley materials from Bob Dylan and The Band to the Woodstock Festival’s Joni Mitchell anthem and blues-rock-soul from Jimi Hendrix. Their June 2017 album release and performances will feature original compositions as well, inspired by their surrounds and each other. Presented by Celebrity Series of Boston.