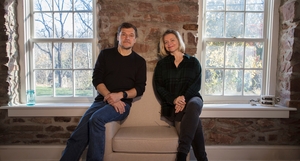 First Congregational Church is set to host the debut album performance of award winning neo-classical composer/pianist Heidi Breyer in her debut performance of her new album “Moonlight in Empty Rooms” on February 9 at 7:30 pm with the net proceeds to benefit the Refugee Immigration Ministry program of Greater Boston.

About Heidi, her husband realist-painter Alexander, and her new album “Moonlight in Empty Rooms” –

In a surprisingly private corner of the very public worlds of music and art, you will find the eminent Russian realist Alexander Volkov and his wife, award winning pianist-composer Heidi Breyer in their respective studios, working alone on their inextricably connected art forms. These two artists have pushed the boundaries of collaboration well beyond synergy to synonymity through sharing their lives, their observations of the world around them and their love of art as a nourishing life ingredient.

After ten years of tough life changes and on-going artistic exploration and career growth, Alexander and Heidi have arrived at “Moonlight In Empty Rooms” an art and musical immersion that speaks to anyone looking for an opportunity for deep contemplation in the comfort of their home, or, the seat of a recital hall.

The collection of 12 piano and violin pieces were written specifically in response to Alexander’s paintings of the same name. In the booklet that accompanies the CD, we find images, explanations and vignettes of inspiration, but if that is not enough, also enclosed is a dvd containing astounding moving footage crafted almost entirely of Alexander art, set to Heidi’s music with each of the 12 videos maintaining their integrity through the simple and immersive way Alexander and Heidi created them.

In this event, the two artists collaborate in live performance. Alexander speaks philosophically about art and life and Heidi plays solo or ensemble and pitches in with lighter comment as if steering at the helm of the ship. It is a rare and unique thing.

The church will only seat 190 for this event, so we urge those interested to purchase tickets in advance.

About the Refugee Immigration Ministry

“Building Community with Uprooted People to Serve the Common Good,” is the mission of Refugee Immigration Ministry (RIM). This faith-based organization was founded in 1986 and provides community-based support to individuals and families who have been uprooted by violence. Research has shown that when someone has lost everything, they hold on to their faith. RIM’s faith-based approach builds collaboration between community faith groups in order to provide support to each client from his or her own faith.