Halloween Mystery Theater at The Rockwell 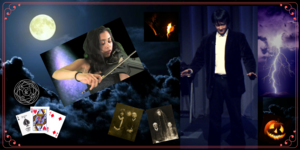 Tired of the same old Halloween costume party routine? Trade it in for a chilling night of magic, music and mystery. This October 31, The Rockwell will present “Halloween Mystery Theater” on All Hallows Eve as acclaimed magician and mentalist Méliès and world-renowned violinist Marissa Licata join forces. In this collaborative program, Méliès will perform astonishing magical illusions, connect with the audience telepathically and summon the spirit world in a special séance while virtuoso Licata joins him on stage to perform solo sets of her haunting other-worldly music to thrill revelers with a haunting Halloween soundtrack.

“Marissa Licata is a powerhouse soloist who draws musical inspiration from Eastern Europe, Latin America and the Middle East. Licata’s unique gypsy-like fusion highlights universally familiar melodies with contagious rhythmic energy which showcases a relentless and a stylish flair. Her electrifying presence has been featured on stages throughout the world and has put her in high demand as both a featured soloist and recording artist. Featured as a lead musician on prominent tours, she has also collaborated on projects and performed alongside the likes of artists such as Alicia Keys, Ben Harper, Ringo Starr, Dave Stewart, Gloria Estefan, Pras of the Fugees, Gaby Wilson and more. Based in Boston and New York, Licata is currently in residence with Boston Ballet.”

“Magician and mentalist Méliès, named ‘Best Magician in Boston’ (Thumbtack, 2015), is a professional Boston-based magician and was formerly mentored by acclaimed Chilean magician Matias Letelier. Méliès performed at the 2016 ‘Downton Abbey’ series finale gala at WGBH and has performed for and array of clients such as the Harvard Film Archive, Zip Car, Johnny D's and Rosie's Place. With his exceptional blend of magic, mind-reading and sophisticated humor, Méliès creates a shared experience of wonder and mystery that leaves his audiences thrilled by the possibility of the impossible.”

This event is recommended for persons over the age of 12. For more information on the artists, please visit www.marissalicata.com and www.magicianmelies.com.