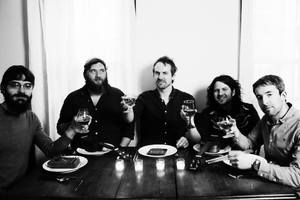 On the third Thursday of June, July, and August, see some of the Boston area’s best bands as you never have before—in the immersive setting of the Planetarium. The bands will perform a set of fan favorites complemented by innovative visuals created by the Planetarium team.

This summer, the Museum's Charles Hayden Planetarium is the place to be for groundbreaking, innovative nightlife! Every Thursday night, the dome lights up with exciting, one-of-a-kind new collaborations, performances, film screenings, and more!

All Summer Thursdays programs are intended for audiences 18+.

About Hallelujah the Hills:
Described by Spin magazine as "criminally underappreciated" and lauded by the website Pitchfork for its "fist-pumping anthems," Hallelujah the Hills has been declared "Boston legends" by the website Stereogum. The Boston Herald recently described the band's sound as "the kind of punk rock you'd expect on stage at the roadhouse from Twin Peaks." The group's most recent album, Have You Ever Done Something Evil? (2014) was named the most Overlooked Album of the Year by the website PopMatters and landed the band on more than a dozen year-end best-of lists.

Our generous friends at Hubway will be providing guaranteed docks at the Museum from 6:30 p.m. to 9:30 p.m. The Hubway valet will make sure that your bike can be docked here, even if the station appears full. Bike on over and don't worry - all you have to do is enjoy the show.