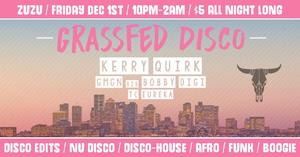 After initially stumbling upon electronic music production while attempting to record guitar in college, Tom kicked off his music career by producing two wavy dream pop albums. When his band went its separate ways, he was reminded of his early experiments with producing dance music and decided to pursue it as a solo endeavor under the stage name of TC eureka. In 2012, he became involved with Basement Movement, and quickly fell in love with the scene.

In 2015, TC eureka opened a new chapter in his artistic development when he attended Burning Man for the first time. 2017 marks his 3rd year attending Burning Man, and he has had the opportunity to play on various stages all over the playa, such as Root Society and EZ Tiger.

Endlessly driven by the pursuit of a unique sound, TC eureka draws from nearly all genres of music to create a journey on the dance floor.

Boston-based groove enthusiast with a passion for the deeper shades of disco, house, funk, and tech.