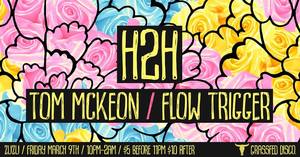 Boston based duo providing you with an eclectic vibe of house music ranging from booty shaking bass lines.. to deep atmospheric tech

After discovering the world of underground house and techno during a few months spent in Buenos Aires, Argentina, Manny moved to Boston in early 2014 and quickly became a regular at local events. Seeking to become more involved in the scene, he enrolled in Mmmmaven’s DJ program and began to hit the decks under the name Flow Trigger in early 2015. In late 2016, he returned to Mmmmaven for a comprehensive music production course.

Inspired by labels such as Anjunadeep, Diynamic, Suara, and Hot Creations, Flow Trigger plays an eclectic mix of house, techno and electronica. He has recently played alongside local talent in Boston at venues such as Goodlife, Wonderbar, 49 Social, Aeronaut, and Cantab Lounge.