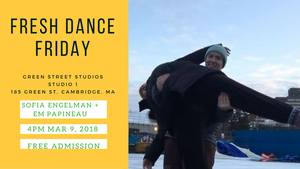 Fresh Dance Friday is an informal, free performance series at Green Street Street Studios. It provides local artists the opportunity to show work in progress and receive feedback, as well as a casual welcoming environment for dance audiences new and old to see new dances, ask questions and make connections.

ABOUT THE ARTISTS
Em Papineau and Sofia Engelman are dance artists based in New England, studying at Smith College. Their partnership centers around studying/researching/exploring/investigating duet forms, queerness, mess, and work with objects and text. Their first work, “Where the air is light and clear,” was presented at ACDA and is a study of queer love, being seen, athleticism, and sameness. Em and Sofia have both studied with Heidi Henderson, Shayla-Vie Jenkins, Chris Aiken, and Karl Rogers, and are interns at Contact Quarterly. Em has performed in works by choreographers including Dante Brown, Shakia Johnson, Chris Aiken, and Meredith Lyons, and has shown work at the Bates Dance Festival, Smith College, Casco Bay Movers, and Thornton Academy. Sofia has shown solo works at venues such as Ponderosa, ICA/Boston, School of Contemporary Dance and Thought, and Bates Dance Festival, and performed in the work of Lauren Simpson, Angie Hauser and Chris Aiken, and Michael Figueroa. The pair look forward to continuing to build a joint body of work.

“Where the air is light and clear” is a short yet highly athletic duet. Within a queer, romantic frame, the work focuses on physicality. The physicality of two similar bodies. The performers go for a ride, following and interrupting momentum, finding space together and apart. Their second short work...is a surprise.