Freddie for a Day Boston 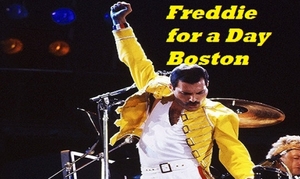 Come celebrate the life of the iconic Freddie Mercury, lead singer of the legendary band Queen. Don a mustache and enjoy the hit songs performed by local talent. Learn more about this global event here. The Boston performance of Freddie For a Day will benefit the Mercury Phoenix Trust and the AIDS Action Committee of Massachusetts.

The Mercury Phoenix Trust was founded by Brian May, Roger Taylor and their manager Jim Beach in memory of rock band Queen’s iconic lead singer FREDDIE MERCURY who died in 1991 from AIDS.

AIDS Action Committee of Massachusetts is a leader in the fight against HIV/AIDS, advocating at the city, state, and federal levels for fair and effective AIDS policies, conducting cutting edge HIV prevention programs, and providing health and wellness services to people already living with HIV. Founded in 1983, AIDS Action is New England’s largest AIDS service organization.

Michelle McPhee will emcee and the event will feature...

and aerialist Ari Green performing as Freddie Mercury himself!

There will be a costume contest and raffle. The event will be sponsored by 1510 WMEX.