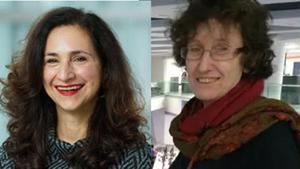 Join us for a live conversation with subject Rachel Madpis Ben Dor and moderated by Lisa Fishbayn Joffe on Monday, March 8 at 7:00 PM.

Dr. Rachel Ben Dor is a Biblical and Talmudic scholar with a PhD from the Hebrew University of Jerusalem. Her current research is about women peace advocates in Israel and their use of biblical texts in communicating their movements’ messages. Rachel founded and led the Four Mothers’ grassroots women’s peace movement which lobbied the Israeli government to stop the war with Lebanon in 2000. Rachel has documented the story of the movement in a book (to be published in Israel March 2021) and on the web. To learn more about the book, visit www.rachelbendor.com. The book is based in part on documents and videos collected in a digital archive, available at http://library.osu.edu/projects/fourmothers.

Lisa Fishbayn Joffe is the Shulamit Reinharz Director of the Hadassah-Brandeis Institute at Brandeis University, a research institute on Jewish Women’s and Gender Studies. Dr. Joffe researches and teaches feminist and legal theory with a focus on Jewish feminism in America and Israel and on gender issues at the intersection between secular and religious law. Dr. Joffe is also a co-founder of the Boston Agunah Taskforce, devoted to research, education and advocacy for women under Jewish family law.

This event is part of the Boston Israeli Film Festival