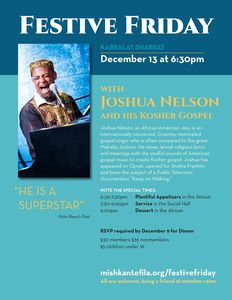 Join us for an amazing night of music, community and great food.
Joshua Nelson — The Prince of Kosher gospel New Jersey
Cultural traditions typically change slowly, over the long arc of history. But occasionally a folk cultural innovation emerges that are startlingly fresh in its outward manifestation, although it remains deeply—even reverently—traditional at its core. You may have never heard of “kosher gospel” music before today, but the inspirational performances of Joshua Nelson, the creator of this style, will surely call out to your soul.

Kosher gospel is the marriage of Jewish religious lyrics and meanings with the soulful sounds of American gospel music. While the word “gospel” a Greek word meaning good news, is usually associated with African-American Christian churches, the musical styling is African, sounds that came from several African tribes, and developed as a tool to escape social injustice. This was the Spiritual, the Meter Hymns, Jubilee songs and ultimately, the coined “Gospel Music.” These African rhythms, pre-date the West Africans introduction to Christianity. These same sounds have been retained in the musical cultures of Black African Muslims and Jews, and such soul-inflected vocalizations filled the Black Hebrew synagogue Joshua Nelson attended as a child with his family, observant Jews who traced their lineage back to Senegal.

When he was eight, Joshua Nelson discovered an album by Mahalia Jackson, the Queen of Gospel, in his grandparents’ record collection, and he fell in love with her singing. During his teens and early twenties, he became widely celebrated as a gospel singer continuing the Jackson’s legacy. Born and raised Jewish, he continued studies of Judaism, including two years on a college and kibbutz program in Israel, clarified his understanding that throughout history, Jews had always integrated Jewish law and religious practices with the cultural context in which they lived; for example, as Nelson points out, any ethnic style of cuisine can be Jewish if it is kosher. Upon his return from Israel, Nelson began to apply this understanding to music, beginning what has been called “a revolution in Jewish music” by combining Jewish liturgical lyrics with one of America’s best-known indigenous musical forms; thus kosher gospel music was born.