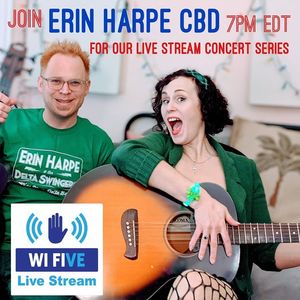 Erin Harpe's Country Blue Duo goes live on Facebook every Tuesday, Thursday and Saturday at 7 p.m., and every Sunday at 2 p.m.

Erin Harpe has been called “one of the most dynamic, talented and exciting roots rocking blues women on the scene” by Living Blues Magazine. Recently adding 2019 New England Music Awards’ “Blues Artist of the Year” to her list of accolades, Erin has been hailed as “an authentic blues chanteuse”, as well as a celebrated guitarist and purveyor of early fingerstyle blues. (She is often compared to Memphis Minnie, JoAnn Kelley, Rory Block, or Bonnie Raitt.) Erin has toured all over the US and Europe, opened for ZZ Top, Buddy Guy, James Cotton, Honeyboy Edwards and more. She’s headlined festivals, and released three critically-acclaimed albums on the VizzTone label, which earned accolades from Living Blues, Downbeat, Sing Out!, Vintage Guitar, and many other highly-regarded publications and has topped the charts in the Roots Music Report, the iTop Top 100 Blues Albums AND Relix Jamband Radio! Hear for yourself – Erin’s music is available streaming on all major platforms from Spotify to iTunes!

Erin performs with her husband/bass player Jim Countryman in their multiple-award-winning electric blues band Erin Harpe & the Delta Swingers, as well as with their new acoustic duo Erin Harpe CBD (Country Blues Duo), and on top of that with their (also award-winning) psychedelic dance rock band, Lovewhip. When not on stage, Erin teaches and gives workshops on finger-style piedmont, country, and delta blues, for more on that go to www.erinharpe.com/education.