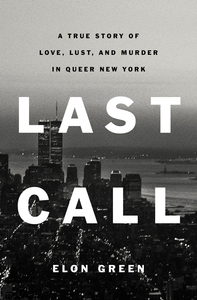 Join the Boston Public Library for an online conversation with Elon Green, author of Last Call: A True Story of Love, Lust, and Murder in Queer New York. For this talk, which is part of the BPL's Repairing America Series, Green will be in conversation with Michael Bronski, who has been active in gay liberation as a political organizer, writer, editor, publisher and theorist since 1969.

This program will occur over Zoom. People who are interested in attending are kindly asked to register at the following link: https://boston-public-library.zoom.us/webinar/register/WN_wd0y146HRvC73UycRORWCA.

**Told for the first time, the captivating true crime narrative of the "Last Call Killer" who preyed upon the gay community of New York City at the height of the AIDS epidemic**

Last Call is the gripping true crime story of The Last Call Killer, who preyed upon gay men in New York in the ‘80s and ‘90s. Yet because of the sexuality of his victims, the murders at the hands of this notorious serial killer have been almost entirely forgotten. This socially important piece of history is a nuanced testament to the vibrant gay community and the challenges they faced in the post AIDs milieu of early 90s New York City.

More than impersonal crime reporting, Last Call brings to life the rich and tragic lives of The Last Call Killer’s victims and exposes the system that allowed them to be silenced. Green has crafted a methodical, yet vivid investigation into an era with powerful resonances to our world today.

"Last Call, Elon Green's stunner of a debut, scaffolds the gripping account of a serial killer stalking the bars and hangouts of early 1990s queer New York over a heartfelt elegy to the lost lives of the murdered men, of a community ravaged by AIDS, and of a city in perpetual ruin and revival. This is a book I will reread again and again and find new and astonishing insights every time."
—SARAH WEINMAN, award-winning author of The Real Lolita and editor of Unspeakable Acts: True Tales of Crime, Murder, Deceit & Obsession

To order Last Call from one of the BPL's community bookstore partners, Trident Booksellers & Cafe, visit the following link link to their website: https://www.tridentbookscafe.com/event/bpl-event-elon-green-%E2%80%94-last-call-true-story-love-lust-and-murder-queer-new-york. Use the code BPLSHIP for free media mail delivery!

Elon Green has written for The New York Times Magazine, The Atlantic, The New Yorker, and The Columbia Journalism Review, and appears in the anthology Unspeakable Acts: True Tales of Crime, Murder, Deceit & Obsession. He is an editor at Longform. This is his first book.

Michael Bronski is an independent scholar, journalist, and writer who has been involved in social justice movements since the 1960s. He has been active in gay liberation as a political organizer, writer, editor, publisher and theorist since 1969. He is the author of numerous award wining books including The Pleasure Principle: Sex, Backlash and the Struggle for Gay Freedom (1998) and Considering Hate: Violence, Goodness, and Justice in American Culture and Politics (2015). His most recent is A Queer History of the United States for Young People (2019). He is Professor of the Practice in Activism and Media in the Studies of Women, Gender and Sexuality at Harvard University.