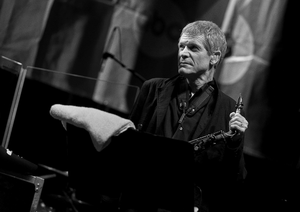 In his three-and-a-half decade career, David Sanborn has released 24 albums, won six Grammy Awards, and has had eight Gold albums and one Platinum album. Having inspired countless other musicians, Dave has worked in many genres which typically blend instrumental pop, R&B and lately, more and more traditional jazz. playing. Sanborn has been a consistently in-demand featured soloist/Artist with legendary rock 'n roll group, The Rolling Stones and touring with David Bowie with whom he recorded the famous solo heard on “Young Americans."

He continues to be one of the most highly active musicians of his genre. As a whole, Dave is an artist who pushes the limits and continues to make music that challenges the mind and goes Straight to The Heart.