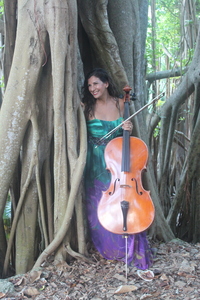 Cellist Kate Kayaian is known for her stunning artistry and for her passion for collaboration. She maintains a rigorous schedule balancing her solo and chamber music performances with her teaching and conducting positions and musical exchange projects around the world. Her 2017-18 schedule includes recitals and concerts in Boston, Chicago, South Florida, Charleston, Savannah, Bermuda, and throughout the New England area.

Originally from Chicago, IL, Kate came to Boston to pursue her degree at the New England Conservatory of Music where she studied cello with Colin Carr, and chamber music with Eugene Lehner, Irma Vallecillo, Scott Nickrenz and the Borromeo String Quartet. Subsequently, she won a three-year fellowship with the New World Symphony where she performed as principal cellist under the baton of Music Director Michael Tilson Thomas and was a frequent performer in the chamber music series. She spent two years at the Spoleto (U.S.A.) festival, and three summers at the Tanglewood Music Center where she was a member of the Conductor's Quintet.

A strong advocate for new music, Kate works closely with today's leading composers and has premiered works by Michael Gandolfi, Kati Agoc, John Adams, Steven Mackey, Jonathan Bailey Holland and Andrew Norman amongst many others. She performs and records regularly with such acclaimed ensembles as the GRAMMY nominated group Boston Modern Orchestra Project, and has had the honor of working with the world's most esteemed conductors and proponents of contemporary music: Pierre Boulez, Oliver Knussen, Gil Rose and Michael Tilson-Thomas. She lives with her husband Paul in Hamilton, Bermuda and Boston, Massachusetts, and can be heard on the Naxos, RCA, and BMOP/sound recording labels. Kate plays on a 1947 Primo Contavalli cello and a bow by François Nicolas Voirin.