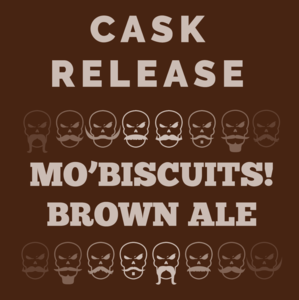 Every Thursday, we tap a fresh pin (keg) of this deliciousness and serve it up alongside heapin' Sicilian slices from Sillari's Pizza in Malden!

Beer Name: Mo'Biscuits!
Style: Brown Ale
ABV: 5.1%
IBU: 26
Color: The same brown you get from a marshmallow *right* before it catches on fire.

Brewers' Notes: We partnered up with the Movember Foundation for this beer, so we obviously had to go with the manliest of beer styles: brown ale. It's the chest hair of beer - not everybody likes it, but it's here to stay so you might as well just roll with it and enjoy the ride!

Located in the heart of Everett's budding Fermentation District, the taproom is open Wednesday through Sunday and features full pours, flights, and growlers from ten rotating tap lines. In addition to a weekly cask, the taproom hosts games and an ongoing series of food trucks and pop ups. Outside of the occasional tasting, the best place to find Bone Up is right at the source!