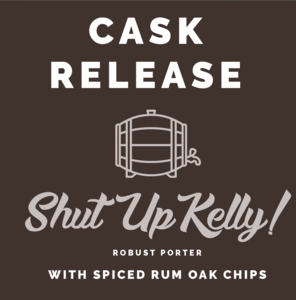 Every Thursday, we tap a fresh pin (keg) of this deliciousness and serve it up alongside heapin' Sicilian slices from Sillari's Pizza in Malden!

Brewer's Notes: Porter might be my favorite style of beer to brew because, frankly, it's the easiest. There are a dozen different ways you can screw up a porter and still have it turn out pretty good (it's also a go-to when drinking beer from an unfamiliar brewery, for similar reasons). The downside of such a forgiving beer style is that it's that much harder to make something that's better than Pretty Good. But since we cut our teeth on porter, and have been coming back to the style for over a decade, we've got a few tricks up our sleeve(s). So give it a try! Even if you've been disappointed by dark beers before, you may be surprised.

Located in the heart of Everett's budding Fermentation District, the taproom is open Wednesday through Sunday and features full pours, flights, and growlers from ten rotating tap lines. In addition to a weekly cask, the taproom hosts games and an ongoing series of food vendors and pop ups. Outside of the occasional tasting, the best place to find Bone Up is right at the source!