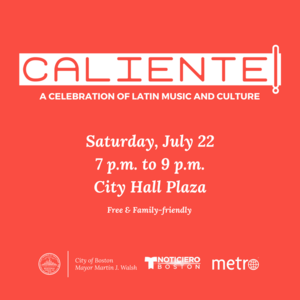 Caliente! returns to City Hall for its 10th year, celebrating Latin music, art, and dance. This celebration of Latin music and culture will be held on Saturday, July 22 from 7 p.m. to 9 p.m.

An urban-influenced bachata group from New York, Bachata Heightz gained prominence in 2009 with their hit single “Me Puedo Matar.” All five members, Jerry García, Jeffrey Cruz, Aneudy Hernandez, Jonathan García, and Diego Capellán, are of Dominican descent. The group signed a recording contract with Sony Music and released their debut album, The First, in 2009.

Caliente! is produced by the Mayor’s Office of Tourism, Sports, and Entertainment, whose mission is to “advance tourism in Boston and promote participation in public celebrations from Boston residents and visitors” to the City. Caliente! is promoted by Telemundo Boston.