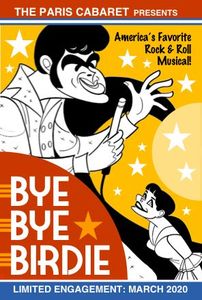 Bye Bye Birdie is a stage musical with a book by Michael Stewart, lyrics by Lee Adams and music by Charles Strouse.
Originally titled Let's Go Steady, Bye Bye Birdie is set in 1958. The story was inspired by the phenomenon of popular singer Elvis Presley and his draft notice into the Army in 1957. The rock star character's name, "Conrad Birdie", is word play on the name of Conway Twitty. Twitty is best remembered today for his long career as a country music star, but in the late 1950s, he was one of Presley's rock 'n' roll rivals.
The original 1960–1961 Broadway production was a Tony Award–winning success. It spawned a London production and several major revivals, a sequel, a 1963 film starring Dick Van Dyke, Janet leigh and Ann Margaret, and a 1995 television production. Musical highlights include Put On A Happy Face, Sincere, One Boy, One Last Kiss, A lot of Livin' to do, Kids, An English Teacher plus We Love You Conrad and Bye Bye Birdie the title!
**********************************
Cover charge is $18 per person plus purchase of your dinner entree from our regular menu on all the Saturday shows. Sunday matinees or group rates on a Saturday will feature a FLAT rate to include your complete meal from appetizer to coffee & dessert, tax, gratuity and the show all bundled into one cost.
**Choices of Baked Stuffed Chicken, Broiled Schrod,
Lasagna is $ 48.00 per person.
Prime Rib or Seafood Casserole is $55.00
RESERVE EARLY 781-297-SHOW(7469)