Bullets into Bells: Poets and Citizens Respond to Gun Violence 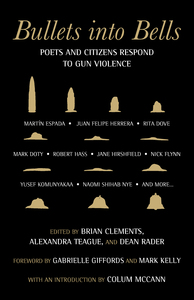 A powerful call to end American gun violence from celebrated poets and those most impacted, including a foreword by Gabrielle Giffords and Mark Kelly and an introduction by Colum McCann, published on the fifth anniversary of the Sandy Hook shooting.

The result is a stunning collection of poems and prose that speak directly to the heart; a persuasive and moving testament to the urgent need for gun control.

“Survivors, advocates, and allies can change hearts and minds—and move more people to join our fight for solutions—by telling stories about the irreparable damage that gun violence does to families and communities across the country.”
—From the Foreword by Congresswoman Gabrielle Giffords and Captain Mark Kelly

“The aim of this anthology—so ably and passionately put together by the editors—is to try to shift the nature of the debate around guns and give voice to the effect of violence in a manner that isn’t always associated with the poetic.”
—From the Introduction by Colum McCann

About the Editors:
Brian Clements is the author of multiple books, most recently A Book of Common Rituals, and editor of An Introduction to the Prose Poem. He lives in Newtown, Connecticut, where his wife, a teacher, survived the Sandy Hook Elementary School shooting.

Alexandra Teague is the author of Mortal Geography, winner of the California Book Award for Poetry, and The Wise and Foolish Builders. Alexandra is an associate professor of poetry at the University of Idaho.

Dean Rader is the author of Self-Portrait as Wikipedia Entry and editor of 99 Poems for the 99 Percent: An Anthology of Poetry. He lives in San Francisco.

Colum McCann is the author of six novels and three collections of stories, including TransAtlantic, Let the Great World Spin, and Thirteen Ways of Looking. Born and raised in Dublin, Ireland, he has been the recipient of many international honors, including the National Book Award, the International Dublin Impac Prize, a Chevalier des Arts et Lettres from the French government, election to the Irish arts academy, several European awards, the 2010 Best Foreign Novel Award in China, and an Oscar nomination. His work has been published in over 35 languages. He is the co-founder of the non-profit global story exchange organization, Narrative 4, which is committed to supporting Bullets into Bells. He teaches at the MFA program in Hunter College. He lives in New York with his wife, Allison, and their three children.

Reddit
13/12/2017 18:00:00 13/12/2017 19:30:00 America/New_York Bullets into Bells: Poets and Citizens Respond to Gun Violence A powerful call to end American gun violence from celebrated poets and those most impacted, including a foreword by Gabrielle Giffords and Mark Kelly and an introduction by Colum McCann, published ... Boston Public Library, Boston, MA 02116 false DD/MM/YYYY